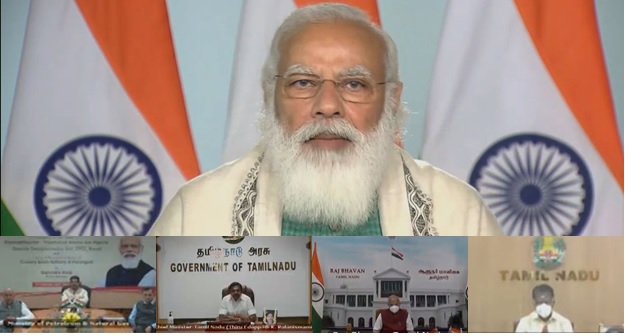 The Prime Minister Shri NarendraModi dedicated to the nation and laid the foundation of key projects of the Oil and Gas sector in Tamilnadu via video conferencing on 17th February, 2021.  Prime Minister dedicated to the nation, the Ramanathapuram-Thoothukudi natural gas pipeline and Gasoline Desulphurisation Unit Chennai Petroleum Corporation Limited,Manali  and laid the foundation stone of Cauvery Basin Refinery at Nagapattinam.  Shri BanwarilalPurohit,Governor of Tamilnadu, Shri Edappadi K. Palaniswami, Chief Minister, Govt. of Tamilnadu ,Shri Dharmendra Pradhan, Minister for Petroleum and Natural Gas and Steel  were participated in the function.

Shri O.Panneerselvam, Dy.ChiefMinister,Govt. of Tamilnadu,ShriTarunKapur,Secretary, Ministry of Petroleum & Natural Gas, and Shri S.M.Vaidya, Chairman Indian Oil Corporation Limited and IndianOil group companies were present on the occasion. Parallel functions were organised at all the venues in Indian Oil and CPCL.

Shri O.S.Manian,MLA,Minister for Handloom and Textiles,Govt. ofTamilnadu,ShriThamimumAnsari,MLA, and senior government officials were participated in the CBR Nagapattinam venue and graced the occasion.

Ex officials on Board of CPCL,EDs senior executives from Indian Oil Southern Region and senior government officials,senior executives of Manalineighbouring industries and large number of employees were participated in Manali Refinery venue and graced the occasion.

While speaking on the occasion the Prime Minister raised the issue of India importing over 85 percent of oil and 53 per cent of gas to meet the demand in 2019-20. He asked, can a diverse and talented nation like ours be so energy import dependent? He stressed had we focused on these subjects much earlier, our middle class would not be burdened. Now, it is our collective duty to work towards clean and green sources of energy, reduce energy dependence. “Our Government is sensitive to the concerns of the middle class”, he emphasized.

To achieve this India is now increasing the focus on ethanol to help farmers and consumers.There is a focus on furthering usage of solar power to become a leader in the sector.Public transport is being encouraged and alternative sources like LED Bulbs are being embraced to enable huge savings for middle class households, The Prime Minister said.

The Prime Minister asserted that while India is working to meet the growing energy demand, It is also reducing our energy import dependence and diversifying import sources. For this capacity is being built. In 2019-20, India was 4th in the world in refining  capacity. About 65.2 million tonnes of petroleum products have been exported.This number is expected to rise even further, said the Prime Minister.

Touching upon the ‘One Nation One Gas Grid’ vision, the Prime Minister said “we have planned to spend seven and a half lakh crores in creating oil and gas infrastructure over five years. A strong emphasis has been laid on the expansion of city gas distribution networks by covering 407 districts.”

The Prime Minister informed that consumer focused schemes like Pahal and PM UjjwalaYojana are helping every Indian household access this gas.95% of Tamil Nadu’s LPG customers have joined the PAHAL Scheme.  Over 90% of the active customers get direct subsidy transfer. Under the UjjwalaYojana, over 32 lakh BPL households in Tamil Nadu have been given new connections. Over 31.6 lakh households benefited from free refills under the PM GaribKalyanYojana, informed the Prime Minister.

The Prime Minister pointed out that Indian Oil’s 143 Km long natural gas pipeline from Ramanathapuram to Tuticorin being launched today will monetisethe gas from ONGC gas fields. This is a part of a larger natural gas pipeline project being developed at a cost of Rs. 4,500 crore. It will benefit Ennore,Thiruvallur, Bengaluru, Puducherry, Nagapattinam, Madurai andTuticorin.

These gas pipeline projects would also enable the development of City Gas projects which are being developed at 10 districts in Tamil Nadu  at an investment of Rs.5,000 Crore. The gas from ONGC field will now be delivered to Southern Petrochemical Industries Corp Limited Tuticorin . This pipeline is going to supply of natural gas as feedstock at a cheaper cost to SPIC for manufacturing fertiliser. Feedstock will now be continuously available with no storage requirements. This is expected to result in saving in the range of Rs.70 toRs.95 Crores in cost of production annually.This will also bring down the final cost of production of fertilizer, said the Prime Minister.

Prime Minister expressed the country’s plan to increase gas share in our energy basket from 6.3 percent currently to 15 per cent.

Enumerating the benefits for local cities the Prime Minister said the CPCL’s new refinery at Nagapattinam anticipates about 80% indigenous sourcing of materials and services.The refinery is going to boost development of transport facilities, downstream petrochemical industries and ancillary and small scale industriesin the region

Dwelling on India’s stress on increasing the share of energy from renewable sources. By 2030, 40% of all energy will be generated from green energy sources, said the Prime Minister. He said CPCL’s new Gasoline desulphurisationUnit at its refinery in Manali inaugurated today is another effort for a greener future

In the past six years, over Rs. 50,000 Crore worth oil and gas projects have been approvedfor implementation in Tamil Nadu. In the same period, over Rs 9100 crores worth projects sanctioned before 2014 were completed. In addition, over Rs 4,300 crore worth projects are in the pipeline.All the projects in Tamil Nadu are a result of joint efforts of our consistent policies and initiatives for sustainable growth of India, Shri Modi concluded.