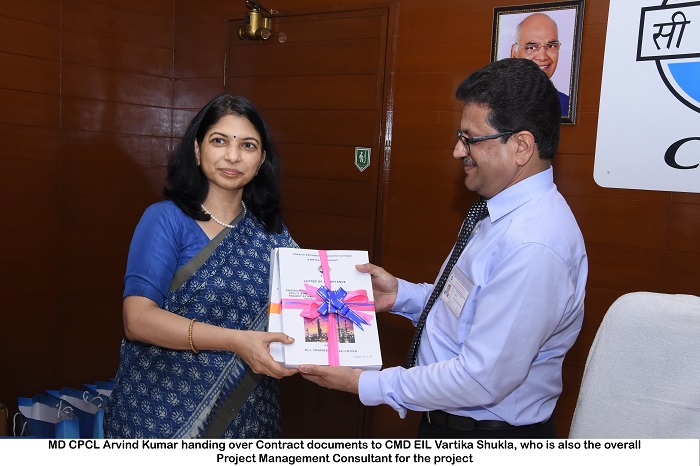 Chennai Petroleum Corporation Limited (CPCL) along with IOCL is installing 9 MMTPA grass root refinery project at an estimated investment of Rs. 31,580 Crores at Nagapattinam, Tamil Nadu. The project is planned to be completed in 45 months’ time.

Hon’ble Chief Minister of Tamil Nadu handed over the Government Order (GO) for acquisition of 606 acres of Land Parcel adjoining the existing refinery site, at Nagapattinam to Shri SM Vaidya, Chairman, IOCL in the presence of Shri Arvind Kumar, Managing Director, CPCL and other Directors of CPCL on 03rd Sep’21.

MD CPCL along with Director (Technical), CPCL, visited Nagapattinam site from 12th to 14th Sep’21 to provide impetus to site enabling activities. They met Hon’ble MP Shri M. Selvaraj to explain in detail about the project stipulations and assured him that the project will be completed on time with the active support of all stakeholders. Hon’ble MP also assured support and cooperation in this endeavour.

CPCL also made a presentation to the District Collector Dr. Arun Thamburaj, IAS and Superintendent of Police Shri. G Jawahar, IPS at Nagapattinam and appraised them about the significance of this prestigious project and the associated economic / infrastructure developments in the adjoining regions of Nagapattinam. MD, CPCL assured that welfare activities associated with the project will be taken up expeditiously.

MD, CPCL interacted with Chairman Karaikal Port & concerned officials and took stock of the existing infrastructure and its applicability for evacuation of products after commissioning of the new project.

Engineering discussions were kick started with all the three consultants from last week at CPCL Corporate Office in Chennai. Top management team of EIL led by CMD Mrs. Vartika Shukla attended the Kick-Off meeting. Similarly, Managing Director & his team from McDermott and President & his team from TCE also attended this important meeting. During the meetings, the essence of working as an integrated team comprising of 3-Cs (Client-Consultant-Contractor) was stressed upon by MD-CPCL to achieve the common goal of project completion well before the scheduled time with 100% compliance to safety.

Procurement & Engineering activities for the project have already commenced and site activities will now gain momentum. The project will act as a catalyst for development of downstream Petrochemical and ancillary industries.